On August 26th, HSSA visited the Graham County Animal Control (GCAC) facility to transfer dogs to HSSA, in an effort to alleviate over-crowding at GCAC. Robert Hernandez, Graham County Animal Control Officer, showed HSSA staff three special dogs. These dogs had been found tied out in the desert and were picked up by GCAC officers. One of the dogs was in need of emergency medical care due to injuries to his head and ear. Another of the dogs was severely emaciated and the third had minor injuries.

Brandy Burke, HSSA Chief Operations Officer said, “As a humane organization, we understood the need for these dogs to receive emergency medical care and had them transported to the local veterinarian (Desert Cross Veterinary Hospital) to receive treatment, since CGAC does not have the facilities or resources to house and treat injured animals.” Once stabilized, the dogs were sent to HSSA for further care and housing.

The Animal Cruelty Investigation team at HSSA (also members of the Animal Cruelty Taskforce of Southern Arizona [ACT]), gathered evidence, veterinary statements and photographs to pass on to the Graham County Attorney’s Office. Scott Adams, Deputy County Attorney for Graham County, took on the case. This would be his first animal cruelty case. HSSA and ACT assisted Mr. Adams with putting together a successful prosecution case against the owner of the dogs. The owner pled guilty and received 24 months’ probation, the inability to house, own, or otherwise possess, any animals for the duration of probation, and was required to forfeit ownership of the three dogs at HSSA, as well as all other animals she currently owned. 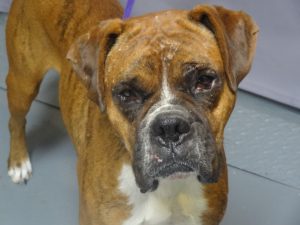 “This is a huge step forward for the animal community. Smaller towns and counties are showing the public that animal cruelty is not acceptable no matter where you live, and that it will not be tolerated.” says Michelle Kleckner, HSSA Operations Coordinator and Animal Cruelty Investigative Assistant. “Mr. Adams, the Graham County Attorney’s office and Robert Hernandez, ACO, all worked diligently to get these dogs justice. I am eternally grateful.”

Two of the three dogs, now named Guinevere and Lancelot, have fully recovered and have already been adopted. Arthur, the dog with the facial injuries, is still undergoing therapy, as it was also discovered that he had a crushed hip which required surgery and physical therapy. He will not be available for adoption until he has been medically cleared, but will remain in HSSA’s care until that time. 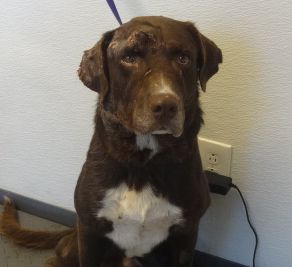 Arthur during treatment at HSSA