PETA is offering up to a $5,000 reward for information leading to a suspect who may have used scissors to try to crop the ears off of a puppy.

On July 8, an abandoned 7-week-old puppy with mutilated ears was found and taken to an animal shelter in Mesa. Officials believe that the culprit tried to crop the dog’s ears, possibly using scissors. 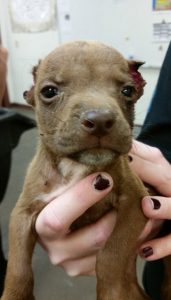 The puppy, now named Pistol, is receiving veterinary treatment and is currently in a foster home.

Someone spotted the dog and he was brought Maricopa County Animal Care and Control, where he received much needed medical attention.

“Aside from the pain that is causing the animal, and with no form of pain medication, you’re also looking at infection,” said Melissa Gable, a spokeswoman Maricopa Animal Care and Control. “You’ll get a lot of bleeding when you are cutting an animal’s ear, so it needs to be handled by a professional ”

Gable said that Pistol is now recovering and should be OK.

Pistol will remain in foster care for another couple weeks and then will be put up for adoption, Gable said.

Police are investigating the incident, but have yet to make any arrests.

That’s why PETA, whose motto reads, in part, that “animals are not ours to abuse in any way,” is offering a reward of up to $5,000 for information leading to the arrest and conviction of the person or persons responsible for this crime.

“Not only did this person cause the puppy excruciating pain and mutilate him by cutting his ears off with scissors, this practice is also illegal and frequently associated with dog fighting,” says PETA Vice President Colleen O’Brien. “PETA urges anyone with information about this case to come forward immediately, before anyone else gets hurt.”

As PETA notes, ear-cropping is carried out by dog fighters to remove an easy “handle” for fighting opponents to sink their teeth into and to make puppies look “tough.” It’s often done using scissors, knives, and other sharp instruments and usually followed by an agonizing process of taping and re-taping the dog’s ears to force them to stand erect. The traumatic, painful procedure can have a strong psychological impact on young pups.

Anyone with information about this case is encouraged to call the Avondale Police Department’s Animal Control hotline at 623-333-7345.

For more information on how to help animals, please visit PETA.org.